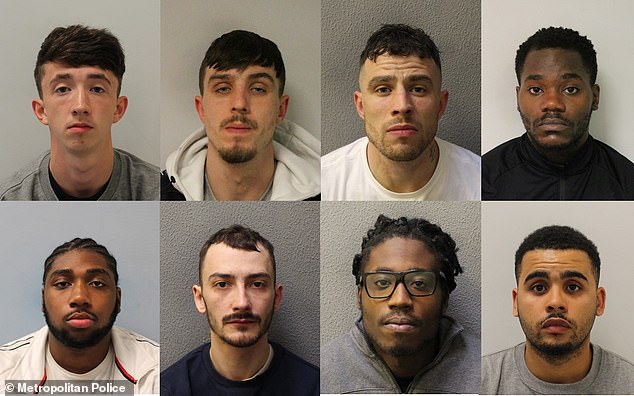 A gang of armed robbers who tried to steal their £ 200,000 watches from Arsenal stars Mezut Ozil and Sead Kolasinac has been jailed for more than 100 years.

The eight men, carrying knives, machetes and firearms, terrorized wealthy North London neighborhoods with a series of violent robberies between April 2019 and July 2020.

They wore masks when they broke into luxury homes and ambushed people in their cars before demanding that they hand over jewelry and cash, often at knife point.

One of the gang members, 28-year-old Jordan Northover, had attempted to rob two Arsenal stars of their £ 200,000 watches with the point of a knitting needle on July 25, 2019.

Sead Kolasinac, 27, was a passenger in his teammate Mesut Ozil’s black Mercedes G-Class jeep when they were ambushed in Hampstead, northwest London.

CCTV footage shows Bosnian defender Kolasinac, known as ‘The Tank’, jumping out of the passenger seat of Ozil’s £ 165,000 4 × 4 to fight Northover, who jabs him with the needle.

Sead Kolasinac (gagged by police) turns to confront the gang of mopeds trying to rob him and Mesut Ozil for their £ 200,000 watches and was unfazed when he tried to hit them despite the knife.

But Kolasinac was unfazed, instead confronting the thugs, who arrived on a moped, and attempted to knock them out before jumping back into the vehicle.

Ozil, 32, making £ 350,000 a week at Arsenal, sped down the wrong side of a road in Childs Hill after the July 25 attack and took refuge in a Turkish restaurant.

Northover previously received a six-year sentence for the attempted robbery.

The gang of eight was sentenced at Harrow Crown Court on Monday and Tuesday following the campaign of violence.

It is understood that they have committed a score of crimes in total.

In a terrifying raid, five masked men armed with a knife broke open the bedroom door of an 80-year-old woman and demanded that she tell them where her safe was.

In the photo: Mesut Ozil

They broke her wardrobes and forced her to the floor on May 19, but finally left when the horrified victim confessed that she did not have a safe.

On April 10 of last year, a driver was waiting in his car when a machete was forced through the window. He ran out of his car, but was chased, threatened and forced to hand over his Rolex.

And in June, a woman was at home with her two children in Golders Green when two robbers in ski masks forced entry with a crowbar.

In the photo: gang members Martin Delaney and Andrew Kiasuka-Kiakanda on a motorcycle

He tried to dissuade them from entering by holding his phone saying he was calling the police and then he ran and hid upstairs while the robbers stole the keys to his black Audi.

Five gang members attacked again the next day in St John’s Wood, forcing the closed door to the victim’s bedroom to be opened.

They ordered him to hand over cash and jewelry at knife point, but he told them that he had lost his belongings in a previous raid.

He was threatened with a gun before the gang fled when police arrived.

Two days later, on July 16, four gang members terrorized a couple when they broke into a house in Brondesbury Park through a bathroom window.

The occupants awoke to find the masked men in their bedroom and were forced to open the safe after one of them threatened to “go see” a daughter sleeping next door.

In the photo: Jordan Northover, 28, who was jailed for six years for attempted robbery.

Detectives kept them under observation and watched on July 19 as four masked gang members carried out a robbery at Barnet Gate.

The assailants set off an alarm and fled empty-handed in an Audi they had stolen in the previous Golders Green robbery.

Just over thirty minutes later, detectives observing them in an unidentified car in Hampstead were shocked when gang members approached the vehicle intending to steal them.

Officers called for backup when the gang used a metal bar in an attempt to break the car window.

The four assailants rushed into a stolen car with a police helicopter in pursuit and all were arrested nearby.